At the core of our mission at REBOOT are the individuals we serve, and there is nothing more powerful than to hear directly from our participants who are finding hope after trauma and are leading lives of joy and purpose. During our course, each participant is encouraged to go through the difficult process of writing and sharing his or her story. What follows is the story of a recent REBOOT graduate, written by him, as he shared publicly at a veterans’ event in Nashville. Only small edits have been made for clarity and to protect the identities of those mentioned.
PAST & PRESENT… this is the story of SGT BRADFORD. 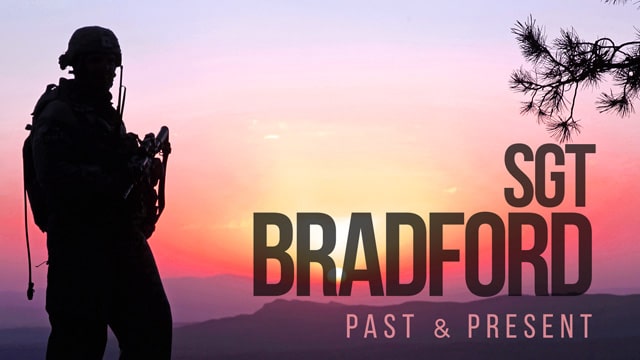 Hello, I’m SGT Bradford. I come from a long line of military men. There’s been a “Bradford” in every war since America started fighting in wars. I always felt like it was my duty to step up when this war started. My story isn’t much different from other soldiers in this war… but this is my story.

I grew up in Murphy, a small town in the mountains of North Carolina. In Murphy, guys love three things: women, beer, and guns. A good day is when all three are together. Now that’s a good time.

So there I was, five years old, hanging out at my Memaw’s house, when life would forever change. The phone rang and I answered. On the other end of the line was my neighbor telling me to go get my mom. Instantly, I knew something was wrong. My dad had taken his own life. As I began to cry and tried to grasp the reality of the moment, my uncle walked up to me and said, “Don’t cry, you have to be the man of the house now.”

As life went on, I got into the normal things boys get into… in my case, mostly trouble. But my friends and I had a good time. As high school wrapped up, I decided it was time to enlist in the Army. I broke the family tradition of becoming an officer because I wanted to be “that” guy… the boots on the ground guy that hunted down the enemy.

My first day in the Iron Rakkasans, I was told that everyone in the Army is a dinosaur and that we were the meat-eating dinosaurs. We hunt our enemies down and kill them. And that’s what I did. I had found my place in the Army. I was proud of what I had become. In fact, one of my proudest moments was when I was given a coin from COL Steele for my first kill. I would go on to eliminate numerous Taliban and Al Qaeda insurgents, including three high value targets. I spent a lot of my time in Iraq in an area known as the “Triangle of Death.”

But during my deployment, I experienced one of the hardest moments of my life. I’d gone through having friends wounded and even killed in other companies, but nothing came close to what I would experience on this day.

On November 1, 2007, my commanding officer, Lieutenant Tracy Alger was killed in combat.

Our group of men was on a three day mission to push an insurgent stronghold out of our area of operation. We’d already not been able to cover the ground that we had expected to cover due to numerous IED attacks and sporadic arms fire, however, we had finally gotten to a place where we could set up a 360 degree perimeter and hunker down for the night. But that’s when the first IED struck my vehicle and the vehicle behind me. The enemy was prepared for us, and we were ambushed.

The first thing I saw as I stood back up in my turret was my friend Lucia slumped over in his vehicle. I immediately told my driver to back up all the way to his vehicle. At that point, with no regard to my life, I hopped out of my gunner turret and began to bang on his windshield. After he finally came to his senses from being knocked out, we took incoming fire. I dove back into my turret and returned fire. As we pushed the enemy away from us, we were able to take Lucia and another friend, Bowden, out of their vehicle and move them to ours.

We thought that was going to be the worst part of the night. But as darkness set in, we decided that we were going to continue the mission, that it would not be a good idea to stay in this area. That’s when all hell broke loose.

In the same area where we had just set up security, we swapped positions with my LT. A minute later, his vehicle was attacked by rocket-propelled grenades and small arms fire and was struck by a catastrophic IED. This was no ordinary IED. This was 500 pounds of explosive with 200 pounds of incendiary, which has the ability to melt metal and penetrate armor. Immediately, what you would consider a non-flammable armored vehicle erupted into flames.

As I looked back, I could no longer see their vehicle. The explosion was so powerful that the vehicle was now sitting in a crater. Nobody could completely understand what was going on. Our patrol’s first reaction was to push forward, so they had left us. As we tried to call on the radio, the rest of our group was already too far away to return to our aid. We had driven into a trap, and I realized we were all alone.

Staff SGT Pennington (our platoon sergeant) and our medic were the first to respond, leaving me to set up security and call in our medevac. As we got closer to the IED site, I saw one of my best friends, Walley, crawl out of a hole with his leg beside him. At this point, I told the rest of the people in my vehicle to dismount and go care for the wounded. I watched them drag my best friend to the back of my truck. He had an injury that most people die from. As we provided care, my driver from my first deployment, Woodard, crawled out of the hole on fire. The first thing he asked was, “Is everybody out of the truck?” He had no regard for his own injury.

Once I called in our medevac, I came to realize that we were missing one – our LT.

One of the most painful things that I’ve ever experienced was to call in that one of my family was KIA. Killed in Action.

After we medevac’d our wounded, it still wasn’t over. Because we were the only element on the ground that could retrieve the destroyed vehicle and its sensitive equipment, we had to sit there for 30 more hours waiting for the vehicle to cool down so that we could search for what was left of our LT. The only thing we could find was a piece of upper thigh and a necklace, which we placed in a bag and put into the back of my truck.

We would go on to clear 83 pieces of explosive ordinance in order for us to carry our LT home.

Amazingly, within 10 hours, we were back on mission to the same area. No tears, no time to grieve. We still had a mission to accomplish. There is no time to process emotion in the midst of war. The mission always comes before grieving.

But even after my deployments ended, a war raged on. This was a battle for my own mind and spirit.

The first time I walked into REBOOT, I had spent the previous six months struggling day in and day out. My marriage was ending. I was angry and had no fuse. Physically I had been injured in Afghanistan and was so frustrated with my medical care I was on the brink of giving up. Frustrated and not improving, I couldn’t even sleep.

And that’s just a few of the issues I was struggling with. Needless to say, life was not as I had envisioned it would be as a kid growing up in a little town in North Carolina.

So as I walked into REBOOT for the first time, there stood a slightly chubby civilian and his do-gooder wife trying to help service members. Looking back, even as I stood up to introduce myself at the first group meeting, I can remember the anger that was still inside me. My identity still remained at war. I remember saying, “I’m SGT Bradford. I’m from the great southern state of North Carolina. I like to kill bad guys and look for IEDs.”

But over time, the consistent support, encouragement, and teaching began to sink in. My insides had become calloused and hardened by combat but were slowly returning to their warm and gooey state. I could feel the holes in my heart being filled. I began to see that I was in a battle that wasn’t against flesh and blood, and that I had the tools needed to regain my true identity. I was not sure that identity still existed.

I remember the first time I shared the story that I’ve shared just now, I felt like the world had been lifted off my shoulders and that I was loved. At that point I realized out of all the programs that I had been through, I had found one that worked.

Two years ago, I stood up and shared my story with a REBOOT group, full of anger, guilt, hate and despair. But today I share my testimony with you, full of hope, optimism, compassion and most of all, faith.

For the countless other service members struggling through government program after government program, I hope you know that hope and healing is out there. There is light that can shine into the darkness and that through the support of people like you, REBOOT will be there to help.