“Through REBOOT, I learned that others felt the way I had felt and that I wasn’t alone in my fight.”

At the core of our mission at REBOOT are the individuals we serve, and there is nothing more powerful than to hear directly from our participants who are finding hope after trauma and are leading lives of joy and purpose. During our course, each participant is encouraged to go through the difficult process of writing and sharing his or her story. What follows is the story of a recent REBOOT graduate, written by him, as he shared publicly at his REBOOT graduation. Only small edits have been made for clarity and to protect the identities of those mentioned.
PAST & PRESENT… this is the story of SGT MITCHELL. 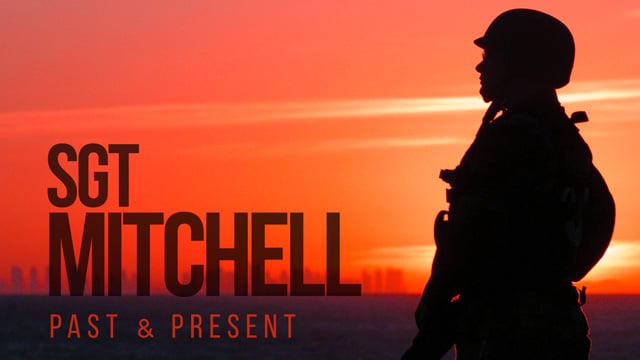 My name is Mitchell. I graduated from REBOOT Combat Recovery earlier this year and would like to congratulate everyone here today as you complete an important milestone and join me as a graduate.

I’d like to say that war was the only place that in my life that I encountered trauma, but unfortunately that isn’t the case. When I first began attending REBOOT, I attended due to the wounds I had encountered during combat. War is what led me to attend that night, but that was just the beginning.

During the first week of REBOOT, the instructor told us that “you may experience healing from trauma that happen to you long before war.” As the words came out of his mouth, it was as if he had hit a nerve. Through all of the struggling, the thought hadn’t really occurred to me. Could my struggles have started prior to my military career?

As I sat there, I could feel my blood pressure rising as distant memories rushed to the front of my mind. I fought the return of the memories, but it was as if they were dying to escape the secret cave where they had been hiding.

When I was a child, for many years, I was sexually molested by my cousin.

This is a secret I had kept from everyone, including my own wife. I had dealt with it. I was over it. I couldn’t change it, so what was the point in reliving those dark moments? I simply stuffed it and moved on. Following this molestation, I in turn began to sexually abuse other members of my family. My sexual appetite grew out of control.

I began to wonder if perhaps I was gay. But I didn’t think I was. I would try to get the attention of girls at school, but they didn’t seem to notice me. Maybe I wasn’t a real man?

I began to search for ways to prove my “manhood” to everyone around me. It is this search that led me into the Army recruiting station. I figured, if I join the Army and fight bad guys, surely that will make me a real man and prove to the world I have what it takes.

Looking back, the recruiter I met that day was full of lies – or maybe he just told me what I wanted to hear. As we discussed various job opportunities in the military, he informed me that mechanics never leave the shop and that I would be far away from combat. So I jumped at the chance. I would be a United States soldier!

I learned quickly after getting deployed that this just isn’t true as I was led to believe. In fact, I would see combat – often. In only the first few days of my deployment, I saw a little boy lose his life and an Iraqi soldier with a portion of his head blown off.

Since I was new to the unit, the other guys thought they need to “toughen me up,” so I was put on the recovery team that retrieved blown up trucks. This was a horrible job because of the things I had to see in the blown up vehicles. Every door I opened was a new personalized horror movie complete with carnage and death.

The timing of my deployment wasn’t ideal. You see, I was the new guy that arrived three months after everybody else had already deployed. This meant that they had already established their circle of friends – and I wasn’t one of them.

But eventually, I actually did make a friend. His name was Jones, and he was the first person to show any real concern for me.

I remember very vividly one day as we were working near a checkpoint, Jones warned me to keep my head down because there had been snipers taking pop shots at people all day. I appreciated his genuine concern and felt a sense of protection as someone more senior was looking out for me. We said goodbye as I mounted my truck and we rolled out.

Just moments later, I would hear on the radio a call for a nine-line medevac.

Jones had been shot by a sniper. He passed away that day.

But the mission pressed on. I would continue to witness a series of events that no person should ever have to see. I struggled. I felt alone. I felt worried and sad all the time. And these struggles were only amplified during my second deployment.

Why was I struggling so bad when everyone around me seemed to be fine? Again, my insecurity as a man attacked. I began believing that I was a weak soldier because of the way these events bothered me. After all, I was a soldier, so these things shouldn’t bother me, right?

I thought leaving the military would make things better. But when I left, my struggles only increased. I was filled with anxiety and depression and began searching for my identity. Suicide seemed like a logical option for peace.

I remember sitting with my mom at Thanksgiving. She looked at me directly in the eyes and, with a disapproving tone, asked me, “Where are you?” I didn’t know. I knew I wasn’t there. My body was present, but in every other way, I was dead.

I felt that I had died in Ramadi, Iraq. My body came home but my spirit stayed behind. I kept secrets. I isolated myself from the world. Life was happening, but I certainly wasn’t living.

But before long, something changed. I heard a REBOOT outreach team member speak one weekend. He shared his struggles with suicide. He talked about three lies that people often believe about their identities – first, that we are what we do; second, that we are what others think of us; and third, that our best days are behind us.

As he spoke about his battles with false guilt and identity, it was as if he was reading my very soul. So I decided to attend an event for training REBOOT leaders. I assumed I could sneak in and put on a good face as a leader while I checked out the program.

Within only a few minutes of the training, I realized that I couldn’t become a leader. In fact, I needed to be led. I needed help, so I registered for the upcoming REBOOT Combat Recovery course in Clarksville, Tennessee.

I remember walking into my REBOOT first meeting. Something struck me as strange. Everyone was smiling and seemed so freakin’ happy. What did they all have to smile about? Wasn’t this a combat trauma healing group? Aren’t we supposed to sit around and hear each other’s war stories and complain about the VA? But everyone seemed to be happy. It didn’t make sense!

Only a few weeks into the process, it started to dawn on me that I was healing. I was starting to address issues in my life that I had never exposed.

During Week 8, we discussed the cost of unforgiveness. For years, I had been carrying around a heart full of unforgiveness and bitterness. I was angry. I hated the enemy, I hated my cousin, and I hated myself. At the end of the lesson, we had the opportunity to come to the front and share the list of people we needed to forgive. I read through my list, which included my cousin and, most importantly, myself.

I took a pair of scissors and cut that card of names into pieces – and for the first time, I felt forgiveness. I felt joy. All of a sudden, I understood why everyone was smiling. They were free.

Coming to REBOOT Combat Recovery was the best decision of my life, after accepting Jesus and marrying my wife. Through REBOOT, I learned that others felt the way I had felt and that I wasn’t alone in my fight.

REBOOT is much more than a program. I have made amazing friends here that let me share my story without trying to one-up me with their own stories. They listen and show me love and support. They have reaffirmed that I am a “real man” and that I do have what it takes to be a great husband, father, and friend.

I will forever be grateful to REBOOT Combat Recovery.